Through our programmes, we engaged 60,462 young people in their communities on skilling to improve their livelihood, take charge of their Sexual Reproductive Health and take on leadership in their communities while using their voice to inform and influence decision-making processes.

We have 64 staff working across our 3 offices in Kampala, Jinja and Moroto and placed with partners in the other districts.

From Youth Researcher to Board Member

This is a story of how Restless Development Uganda recruits young people with potential to be part of our Programmes and supports  them to become leaders, ultimately shifting power through building their skills in training and mentorship programmes in order to lead change in their communities.

Our recently launched Restless Leaders Initiative is a strategic commitment to more effectively build and generate leaders – in our staff and our volunteers. Leaders who will in turn generate leaders through their interactions and influence  with  other young people, local and national governments, development partners, businesses and youth-led civil society partners.

Francis Arinaitwe, 26, began his journey with Restless Development Uganda in 2015 as a volunteer on various projects including the Youth Think Tank (YTT); five years later, he is a member of the Uganda Hub’s  board of directors, representing young people in shaping a youth-powered organisation.

“My first volunteer experience was in 2015, with an HIV prevention program. After six months, I joined the Youth Think Tank (YTT) to carry out youth-led research on harnessing the potential of Hospitality and Tourism as a sector for young people’s employment. My role entailed contributing to the entire research process from the conceptualization of research questions, mapping of research areas, collection and validation of data to the dissemination of the findings.”

Born and raised in Mayuge, a rural district in Uganda’s Eastern region, Francis, who is currently pursuing a bachelor’s degree in development studies from Makerere University sees himself pursuing more leadership responsibilities.

“I am a result of the agency’s efforts in creating young leaders and shifting power around the world. My time as a volunteer with various projects helped turn my potential into competencies fit to represent other young people on the Board of Restless Development Uganda and that is just the beginning,” says Francis.

Francis says, from being a young man with just potential, he has gone on to acquire a myriad skills from Restless Development Uganda, ranging from communication, research design, analysis, reporting, networking, facilitation and community mobilisation.

For living up to the Restless Development values, Francis was voted as the Values’ Champion for 2017-2018 in the Uganda Hub. 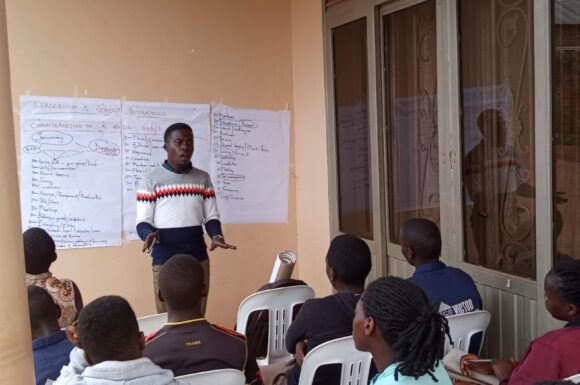 Francis carrying out research in the field with YTT 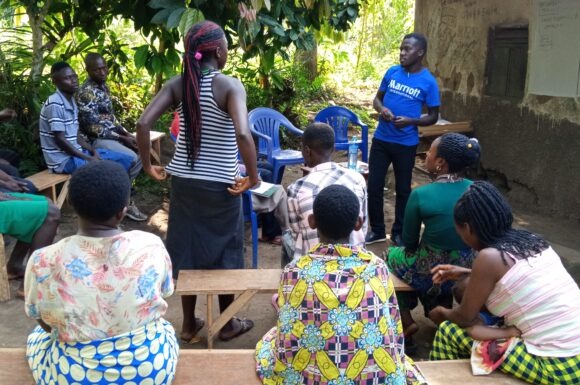 “It appreciates and recognizes the need for young people to own matters that concern them. It’s an approach that appreciates the authenticity of youth voices vis-a-vis their diversity in creating solutions to their challenges, creates ownership and promotes meaningful youth engagement.”

On being a Board member of Restless Development

“My engagement with Restless Development Uganda on the different programs prepared me for my current role as a Board member. My volunteering experience gave me exposure and an understanding of the agency’s work, its mission and vision which enables me to ably contribute to its success and protection of its values.”

On why it is important to have young people on the Boards of organisations such as Restless Development, Francis says, “Only that person who physically experienced the pain can tell you how it feels, the only role you play is that of being sympathetic. It’s important to have young people on the Board because it is an avenue for their meaningful participation, exercising and growing their leadership roles; it is the best approach to shifting power to the youth.”

Advocating for the labor rights of young women

“The youth activist. The former Miss Lira. The labour rights advocate. The girl who rides a motorcycle. The Restless Development staff.” These are some of the identities by which she is known among members of the community.

Winnie, 24, works as a Programme Officer with the Girls’ Advocacy Alliance (GAA), a five-year project implemented by Restless Development Uganda in partnership with Plan International, Terre des Hommes, and Defence for Children – ECPAT with support from the Dutch Ministry of Foreign Affairs. The project started in 2016, to promote equal rights and opportunities for young women in six districts of Uganda, including Buyende, Bukedea, Jinja and Kamuli located in the country’s Northern and Eastern regions.

Over the last five years, Winnie has become the face of GAA in Lira and Alebtong, the other two districts where the project is implemented.

The project was designed to utilize the potential and expertise of young people, who best understand the local dynamics and issues that affect them, to advocate for the economic inclusion of girls and young women through evidence-based research.

Through youth-led research, GAA volunteers managed to identify the main barriers limiting young women from enjoying equal economic rights especially at the workplace, where many of them were working without contracts and other employee rights.

Armed with these research findings, Winnie has been at the forefront of GAA’s work in Lira and Alebtong, where she has engaged local employers in meetings and training to advocate for better workplace conditions and rights for young women.

Take 291 Suites Hotel, QFM and Radio Wa in Lira district, as an example.

“Our engagement with these institutions have yielded positive results that saw a number of women introduced in their management committees which previously only had men,” said Winnie. 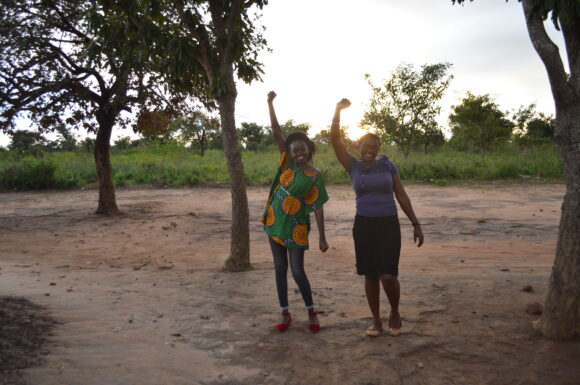 Winnie with Fiona, a colleague at GAA 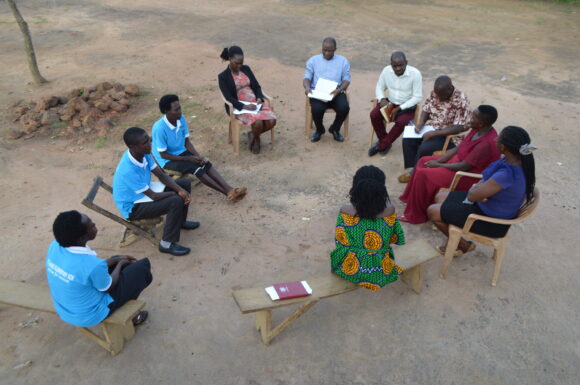 Winnie and the GAA team meet stakeholders in Lira

Across the six districts in which GAA has been implemented, the project has had a positive impact, especially in successfully influencing the improvement of policies of many of the employers to implement national labour laws.

“Some of these results include workplace innovations such as the creation of nurseries for employees with children, adding sanitary pads/towels in company washrooms.

Others include the implementing of progressive anti-sexual harassment policies as well as observing employee rights such as annual leave, through having signed employment contracts,” Winnie said.

Winnie says her biggest satisfaction is seeing her work with others leading to safer and happier women in employment as a result of new labour policies implemented by employers to make the workplace safer.

“By empowering others, I also feel empowered as a result of the meeting and interacting with partners in both Government and Private sectors. I thank Restless Development for trusting young people to lead its work around the world,” says Winnie.

For example, Winnie organised a successful workshop at Lira town with Senior Labour Officers from the Ministry of Gender and Labour in which members of the local Private sector were trained on National labour laws.

How does the Girls’ Advocacy Alliance work?

As the implementing agency, Restless Development Uganda recruits and trains four young people from each target district (24 total), and five at a national level, to lead research-based advocacy efforts for the economic inclusion of girls and young women both at local and national levels.

The young researchers identify and agree on the major issues that negatively affect young women at the workplace in their respective districts. They then identify key stakeholders such as local leaders and/or private sector employers who are able to support them to advocate and lobby through government structures.

The national-level Young Researchers are given the capacity to conduct policy reviews based on the research questions selected by the district level Researchers. Then both groups work together to review the employment policies and regulations relevant to the challenges identified to be affecting the economic inclusion of girls and young women in the target communities.

Although Restless Development Uganda provides guidance, the young researchers are ultimately allowed to structure their own research.

Partnering to advance SRHR in Uganda

In the civil society world, working alone might help one go faster but doing things together through strategic partnerships is the core ingredient to attaining more impact.

The relationship between Restless Development Uganda and Reach A Hand Uganda (RAHU),under the African Youth and Adolescent Network (AfriYAN)  focussed on  youth-led research and advocacy is a stand-out example of the value in good partnerships.

Like so many subjects considered ‘taboo’ sexual reproductive health and the rights that are applicable to all humans have often taken a back seat in family, community and national conversations.

“What has resulted from this is the relegation of SRHR to a by-the-way issue, where Uganda’s population structure is one with a majority youth composition, and the indicators of early teenage pregancy remain alarmingly high.

The participation and efforts of civil society are crucial to allow for collective action around SRHR from communities, policy and decision-makers and individuals to fully contribute to the improvement of the SRHR context in Uganda,” says Maureen.

Maureen adds that in order to meaningfully contribute to the improvement of SRHR outcomes, a collective effort is required to close the information, capacity and structural gaps that are limiting the advancement of youth SRHR in Uganda.

“Collaborating with Restless Development Uganda enabled RAHU to reinforce the collective belief in the power and capability of young people. By leveraging both of our youth networks under the AfriYAN Uganda chapter, an opportunity to meaningfully contribute to the solution sought by young people for their SRHR issues was presented under the ‘My Voice My Rights’ project.

For RAHU, partnering with Restless Development Uganda to ensure the participation of young people in research and evidence gathering for advocacy, was another win in pushing for young people’s participation in spaces of civil society engagement,” she said.

Collaboration for the two partner agencies, according to Ibrahim, has been underpinned by the need to ensure meaningful youth participation. With this as the basis for interventions, the agencies have worked on youth-led research and evidence generation to inform advocacy work under the ‘My Voice My Rights (MVMR)’ and ‘Get Up Speak Out (GUSO)’ projects.

“Under the ‘Get up Speak Out’ project, we have both worked on extending young people’s access to SRHR information and further strengthening the referral pathways to youth friendly SRH service provision,” says Ibrahim. 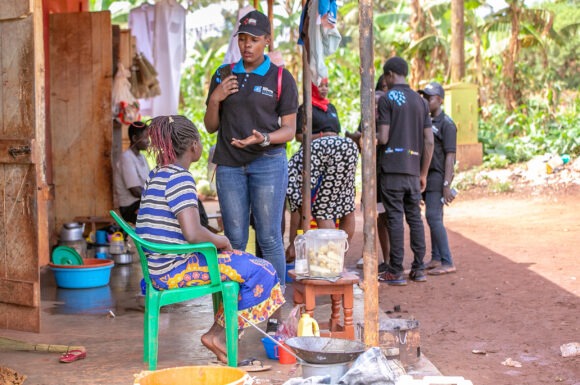 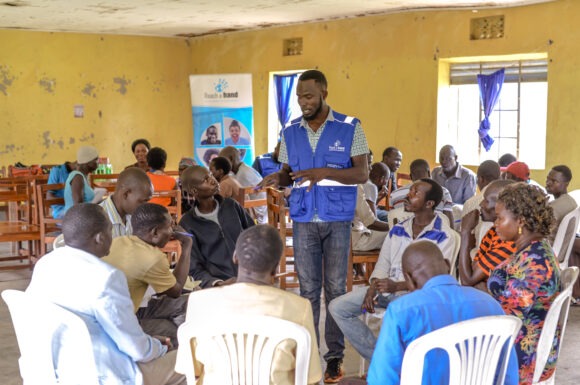 As a result of the efforts of the youth researchers, the ‘My Voice-My Rights’ project, represented by both RAHU and Restless Development Uganda, presented the research findings and the recommendations from the AfriYAN youth advocates at both district and national influencing  meetings.

“This was a notable win because young people through the partnership’s efforts, took the forefront at documenting evidence for the SRHR contexts in different communities and used that as a basis for their evidence based advocacy work; work that continues to outlive the partnership,” says Ibrahim.

In addition, through the AfriYAN Uganda chapter, RAHU’s network of young people benefited immensely from the training and capacity building on research.

For instance, the youth research champions were trained on the stages of research including; developing the research framework (objectives of the research, research tools), data collection processes such as interviewing, focus group discussions, data analysis, reporting and data dissemination (district and national level).

As a result, the young researchers, with the guidance of the Restless Development and RAHU teams, developed the topics and themes on which the research was based.

While partnerships face challenges, working together means they can leverage their different capacities to surmount barriers to success.

According to Maureen, civil society partnerships thrive when they have a shared understanding of the purpose, goal and roles of the parties within the partnership.

“Divergent objectives from partners can result in strenuous partnerships, which ultimately sips into and affects productive implementation. We are glad to say that our partnership with Restless Development Uganda was founded on a shared purpose and goal,” says Maureen.

Both success stories and challenges yield key learnings for partners. These learnings include

“We are thankful to our donors and look forward to seeing continued investment in youth centred and driven evidence collection for advocacy of a progressive SRHR agenda which remains a top priority for both RAHU and Restless Development,” said Maureen.